What is Break Blocks?

Break Blocks is a genre-blending, color and rhythm puzzle game. You play as a young B-Boi on a quest to become the world's top break dancer by battling against foes like Disco Vampires, Hip-Hop Zombies, and Break Dancing Robots.

Where'd We Go? - 05/06/12
Thank you to everyone who has supported Greater Good Games thus far, especially those of you who have purchased Break Blocks for Windows/Mac. I know it's been a while since we've posted...again...and we apologize for the delay...again, but at least we have a better excuse this time =)

We've been brewing up a few awesome things in our absence and we didn't want to talk about them before we had enough details to make them interesting. See? I told you it was a better excuse!

First announcement is that Break Blocks is coming to the iPhone, iPad, and iPod Touch. W00T! Now, why the heck couldn't we have announced that earlier? Well, unfortunately porting from one system to another isn't always a quick operation, even for highly experienced developers. And while we aren't newbs, we definitely aren't highly experienced iOS developers...so before we went off shouting out the awesome news, we had to make sure it was feasible in a relatively short amount of time. And though it's been a rocky road, we've had some Great Success over the past couple months that make the outcome inevitable. Break Blocks will be on iOS sometime in the next few months.

Next up is that we've decided to make a brand new Indie Friendly 2D Engine for our next project. We hammered out the basic details of what we wanted to do next, but we were unable to find an engine that seemed like a really solid candidate for our needs. The closest possibility was Torque2D, but it costs extra to get iTorque2D if we want to bring our games to iOS, and what programmer would ever choose to work with TorqueScript? Consequently, we're making our own and using our experience with other engines to put together what we consider to be the ultimate 2D Engine for Indie devs. Obviously that's a big claim, but I think we've got the skills, knowledge, and drive to back it up.

Last, but certainly not least, is that we've got another game in the works! We're still in the design phase, so details are going to have to remain vague and limited for now, but the game will be a Melee Platformer where speed is critical. You'll be running, jumping, and slashing you way to save the world(well, your digital world anyway) from an unsuspected foe! Along the way you'll gather new weapons and abilities which will help you overcome the dastardly deeds of said foe! If it sounds exciting, that's because it will be...and if it doesn't excite you, just wait for the details to start pouring out in about 3-6 months and you'll see why you should have been excited all along!

Break Blocks has Gone Gold - 02/29/12
It's complete! Over! Done! Gone Gold! After years of working, iterating, and rewriting, we've finally gotten the game out the door! Haven't played Break Blocks? Download the Demo. Been waiting for the release to buy it? Pay What You Want! Already bought it? Download the Final Release.


Thank you all for your support throughout this project! It's been a blast!

January Break Blocks Update: - 01/19/12
So, we just updated the early adopters download and the demo build to include a bunch of the changes we've been working on this month: Voice acting in the tutorial, a bunch of new sounds and character voices, some new enemies and new player animations, new U.I. to show you how powerful your move is/when the enemy will be launching a move, a simplified control layout, and fancy new menus, buttons, and popups. At this point here's what we have left to do: Finish implementing multiplayer, finish Boss #2, get the last 2 songs in place, finish up a little of the voice acting, and then sell thousands of copies!!! Should be a piece of cake, right?

Anyway, give it a download and let us know what you think on the forum!

If you're an early adopter, click this link for the latest full version.

Today we are releasing our latest beta for download, and we've made many changes over the previous versions. The most obvious the changes to the board size (number of blocks that can be on the board), the new hit timer, and the new beat tracks that have been tailored to each song. Additionally, we've continued to extend content by adding new characters, tours and songs, we've managed to fix up a few of bugs on our list, and we've added a new team member, Wes Valentijn!

If you're an early adopter, click this link for the latest full version.


Also, as a sample of some of Stephen White's latest tracks for Break Blocks, we're posting both the Vampire's and the Zombie's second tracks.


We're still on track to finish February, but stay tuned because we'll have more news between now and then.

Thanks to all of you for your interest and your support!

What are we thankful for? - 11/15/11
A new beat marker! One of the most fundamental elements to gameplay in Break Blocks is the Beat Marker. We've made some changes that we believe will make it easier for you to time your hits. I discuss this change as well as some others (such as the addition of voice acting by the very talented Jarrod Lipshy) in the following dev blog update on YouTube. Check it out, and stay tuned as we will soon be updating the executable available for download.

Indie Games Festival Build Complete - 10/19/11
We've done it! We've entered Break Blocks into the IGF...not that it's necessarily going to win, but there's a chance we might at least be a finalist. We've been so excited about getting this done and so focused on the subset of the game that they're going to play that we've hardly taken a moment to talk about the changes. First, you'll notice that we've added a sleek little Versus screen as our loading screen. It's nothing too fancy, but it goes a long way toward making the game feel polished and complete. The next big thing you'll see is the new Sensei Popup, where he tells you important gameplay changes(instead of the old method of having the enemy tell you...which didn't really make any sense). 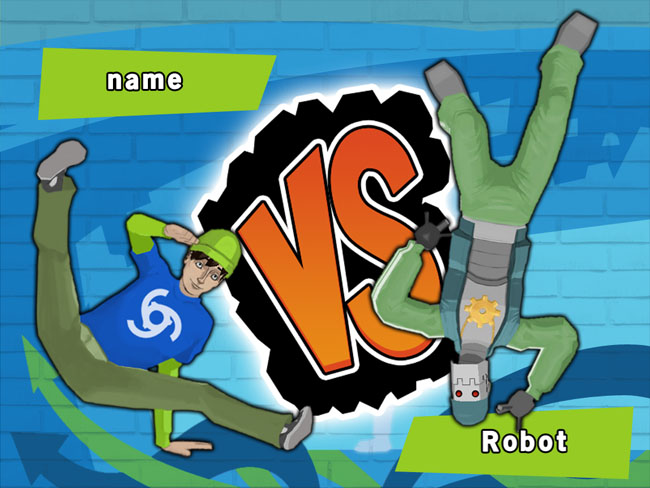 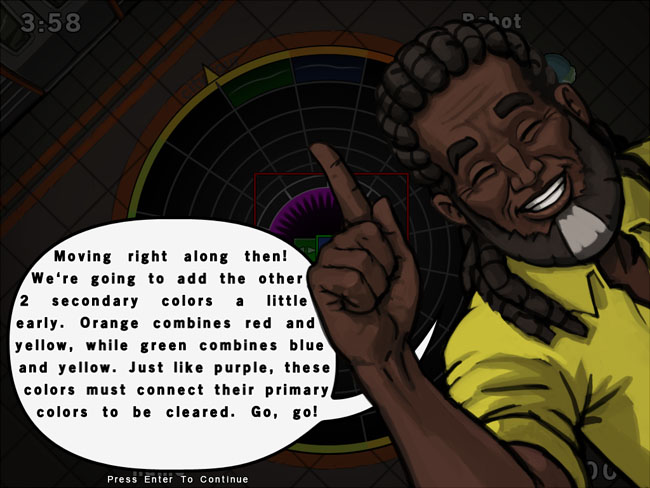 Those changes are all good, but the interesting changes are in the gameplay. We've finally perfected a method of getting beat patterns into the game quickly and concisely so that the beat marker follows the complex beats! This makes the game a lot more interesting at the later stages, just like the other major gameplay change: Secondary Colors can only be cleared by touching their 2 Primary Colors. That's right, now you have to really think about where you're placing your primary and secondary colors in order to be able to clear them. This makes the game a lot more challenging, as well as interesting(and a little more IGF worthy).
So, without further ado, play the IGF build now!

Where'd We Go? - 09/24/11
We're still alive, kicking, and continuing to progress on Break Blocks. As I mentioned, I've been slammed with working on Red Orchestra 2, and while it's not entirely back to "normal hours", I've been making time here and there to keep things rolling around here. In my absence, Noah has been kicking some butt and had plenty of new things for me to plug in. Our Musician, Stephen White, also took a little over a month off to work on a paid gig for another project! Congrats to him! But now we're all back together, focusing on getting the game ready to enter in the Indie Games Festival! Our first step was to implement a clearly awesome idea, which was to get rid of the unsightly and unnecessary "Color Ring" that existed solely to remind players which color corresponds to which keys. "Why not just put the arrows into the blocks?" someone asked. And BAM! here it is: 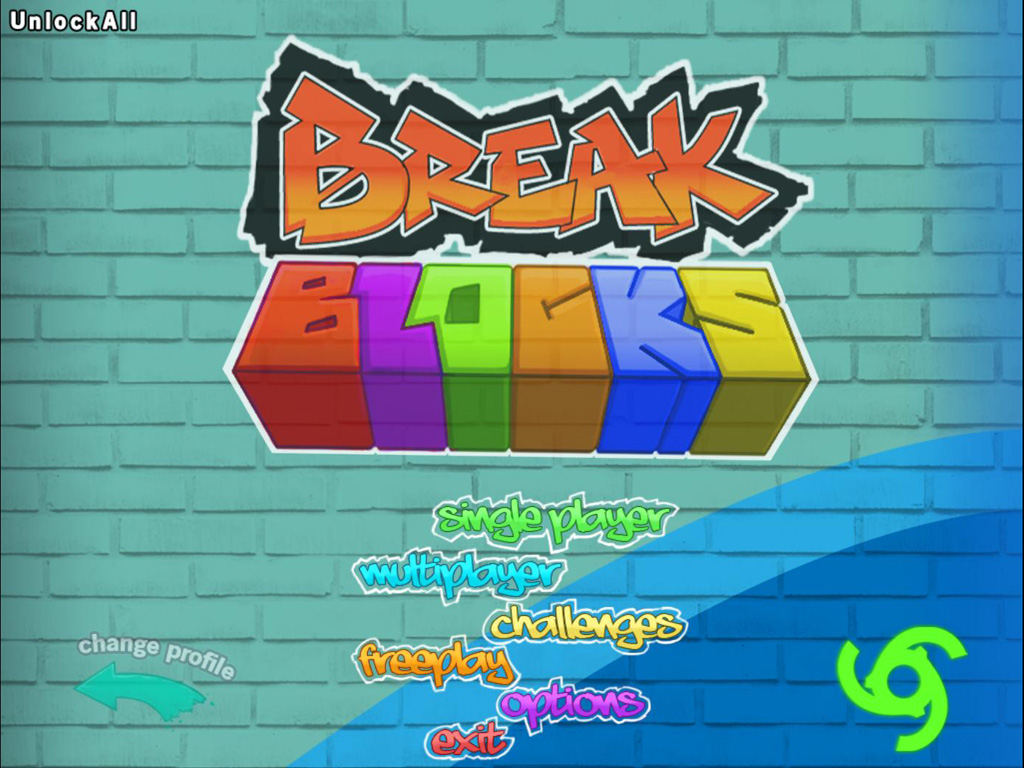 Looks pretty sweet, don't it? Well, it at least makes the game a lot easier and allows players to keep up with the frantic pace that's needed to win dance battles later in the game. And since that's not the only change that we have planned to get in before the IGF build, I better get back to work. Just wanted to make sure you all knew that we're still working hard to bring you the game of your dreams ;)

Wrapping It Up When Time Permits - 08/12/11
It's been a while since we've posted anything because real life has temporarily taken the front seat; such is the life of one developing 2 games at once. My employer, Tripwire Interactive, is currently wrapping things up on our next title Red Orchestra 2: Heroes of Stalingrad. As such, my spare time to work on Break Blocks has been limited recently, as we are working crazy overtime polishing the game up. It's okay, though, because we knew this was going to happen and it's already been worked into Break Blocks' plan of releasing in a few months. In lieu of releasing a new version of the game, we are releasing another song straight from the game, this time it's the Zombie's theme song:

New Early Adopters Build - 07/24/11
As many of you are aware, we have been making even more drastic changes to the game due to feedback we've gotten through the Early Adopters Program. We have streamlined the whole game interface to make it easier to understand, as well as dropping the purchasable Dance Moves system all together. You have been talking and we have been listening. So, try out the new build and continue giving us feedback.

New Interface Progress - 07/14/11
We've implemented some of the changes that we've been discussing with you guys. We've removed Dance Moves, the old Crowd Bar, and the old Combo counter. We now have the "Crowd Bar" incorporated into the gameplay area, around the outer edge using arrows. We have also incorporated the Combo counter into the center of the screen, just outside of the build area. Enough words, just watch the video and you'll see =)

Drop Us Some Feedback